Though the name karate means “empty hands”, weapons were developed to be used with karate techniques. However, the study of weapons is considered a separate martial art called Kobudo. In current practice, weapons training is closely linked with karate.

In the late 1400’s, the use and ownership of weapons was prohibited. Weapons were studied for the same reason that karate was; the Okinawans needed to defend themselves. Japanese Samurai later invaded Okinawa in the early 1600s and reinforced the ban on weapons. In secrecy, the Okinawans continued to practice and improve upon the now well developed martial arts. The Okinawans used weapons that would not be considered “weapons” in the usual way. Most weapons were used from common labor tools that fishermen or farmers would have had readily available. Once these common tools were mastered they could be deadly. Even today, many of these weapons can be adapted to use with current tools and ordinary household items which may be similar to some of the weapons described here.

Bo Staff – The Bo is a solid wooden staff, measuring approximately six feet in length. Like any specialized weapon however, the owner could customize its length in proportion to their height. It could easily be used as a walking stick, but was most commonly used for carrying buckets containing items such as water, farm grains or supplies. If attacked, one could easily drop the supplies and be ready to defend one’s self or property. Due to the Bo’s extensive reach, it was much more effective as a distance weapon and rarely used within close range of an opponent. Solid strikes, blocks, and spearing techniques made it very effective in taking out an opponent well before they had a chance to get within range.

The Sai – Sai are made up of a metal shaft with two protrusions that act as hand guards and are used in pairs. Its typical length is 18 to 21 ½ inches and when held should extend one inch past your elbow. This added length is to ensure that the Sai will protect your entire forearm. At the bottom of the Sai’s wrapped handle is the butt end that can be used to strike an opponent. The Sai was thought to be used by farmers to dig furrows in the ground. Holes were then made with the point of the Sai so that seeds could be planted within them. The Sai were effective in blocking, striking and capturing weapons, especially swords forbidden to the population but carried by the Samurai. Striking an opponent was applied by the metal shaft or butt of the weapon.

Nunchaku – The Nunchaku is made up of two cylindrical or octagonal pieces of wood, connected by rope. It’s wooden shaft should measure the distance from the middle of the hand to the end of the elbow, while the rope length should be approximately the length of a clenched fist. The correct shaft length allows the user to hold the Nunchaku in a way that the entire forearm can be protected. The Nunchaku was originally a flail tool, used by rice farmers to harvest their crops. By swinging it around the rice stalks and pulling them towards them, they could collect the rice from within their boats. The rice could then be broken away from the husks. The Nunchaku is an especially effective weapon. The ability to strike an opponent accurately and at high velocity made it very formidable. Rarely seen in today’s glorified films, it is also a defensive weapon. The shafts of the Nunchaku can be held together to block along the forearm while the rope portion was used to catch and control strikes from another opponent or even another weapon. A more modern version of the Nunchaku (Orcutt OPN Police Nunchaku) is currently being used by law enforcement agencies all over the country.

Tonfa – Tonfa are made from a wooden shaft that is about 19 inches long and are used in pairs. Its handle extends out from the shaft, approximately a quarter of the way down. The Tonfa was originally a handle on a millstone grinding wheel. It was pushed into a hole in the side of the wheel and could be easily taken out if it was needed for defense. Tonfa are used by swinging the shaft around the handle in an arcing motion while snapping the wrist. By doing this, one can deal a very forceful blow, similar to the final snap in a punch or kick. Defensively, the shaft of the Tonfa can be used to guard the forearm in a block. A more modern version of the Tonfa (PR-24 police baton) is currently being used by law enforcement agencies all over the country.

Kama – The Kama is a bladed sickle, attached to long wooden handle and is used in pairs. The handle measures approximately 14 inches in length while the blade measures around 7 inches in length. The inside edge of the blade, from the handle all the way to its point is razor sharp, while the outside edge is dull. Kama were used by village farmers harvest sugar cane and rice. The metal blades of the Kama made them especially deadly weapons. While one weapon would block the attack, the other would quickly be used to slash and cut an opponent. 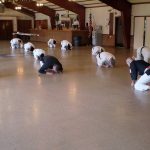 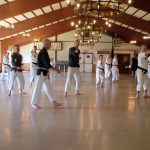 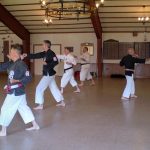 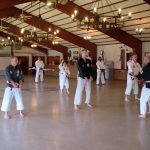 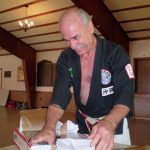 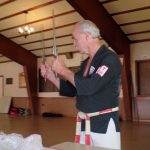 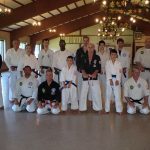 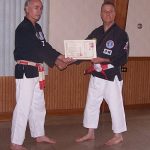 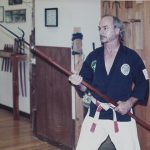 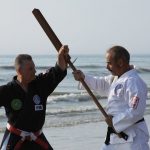 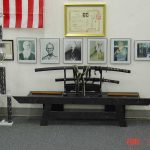 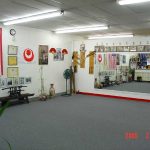 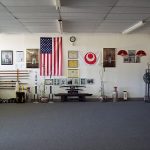 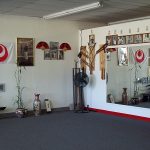 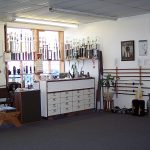